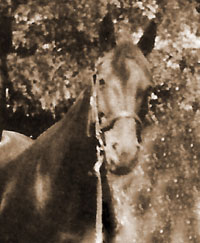 This family has been influential in the studbook but a shortage of filly foals in recent generations have reduced the numbers now represented in the stud.

The original WIDDEN LASS came from the Wormwell Family from the Mooni River in Queensland. The Haydon’s were buying a mob of cattle from them in the 1920’s and the deal was clinched by including a yellow bay mare that had impressed them, called Widden Lass.

WIDDEN LASS came from a long line of proven cutting-out and bush horses. She was by Prodigal one of the best known sires of early stock horses in Queensland. She was a brilliant camp mare and broke her knee in 1927 while competing at Muswellbrook, falling on the cement cricket pitch.

Both had started campdrafting well but had their performance careers interrupted by the war years.

WONGLE produced;
RIPPLE by Blazier, an outstanding pony club mount and hack ridden by Jill Haydon at the Sydney Royal.
WONGLE II by Bobbed Steel, a good type used as a broodmare due to injury.
BAMBINO by Bobbed Steel, her full sister won many campdrafts in the North West performed by Judy Mackay.

The family continues through WONGLE II, a remarkable broodmare evident by the extent her bloodlines have influenced stock horse breeding. 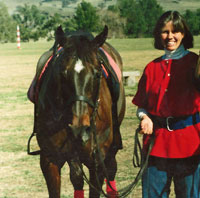 Her foals included the lovely types WONGLE III and SUSIE by Chan, the sires YANDOOYA SOVEREIGN by Young Valais and his full brother REVEILLE. Their full sister BANGLES went to Ventry McLennan where she proved an outstanding foundation mare for the renowned Yarranoo horses. She produced Radar who won the Station Hack at Sydney Royal three times and twice at Brisbane Royal and sired the top mares Belle and Star. Star was dam of the outstanding sire Star Black Minstrel, sire of Bruce McNaughton’s champion campdraft mare Music; Krystle winner Best A.S.H at the National Polocrosse Championships in 1986; the National Champion Dark Glen, winner of everything from led, working, hack to campdrafting; Silver Minstrel, Reggae etc.

WONGLE III (882) was rated as one of the best types sired by Chan and won Champion Broodmare at the Scone A.S.H Show in 1976 which was the only time she was shown. Her progeny won the Mare Progeny Group class many times.

WILLOWY LASS produced KOKODA LASS by Salute 1989 (153290) used as a broodmare and was mother of DANCING LASS (Pavlova) by Dancer 2005 (182278). She was winning in the show ring six months after being started ridden and has excelled in many events.