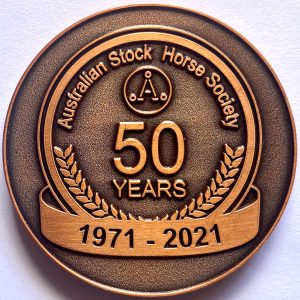 Haydon Horse Stud was one of the foundation studs when the Australian Stock Horse Society was formed back in 1971. It had been operating since 1832 and had kept detailed records of their horses. It was easy then to transfer the Studbook records over to the Society in those establishment years. 2021 marks the 50 Year Anniversary of the Society and the Stud has been acknowledged with the presentation of the 50 Years Medallion.

Jim Haydon was at the first Scone meeting at the Belmore Hotel and this is acknowledged with the engraving on the back of the Medallion.

The stud has always been a strong supporter and stalwart of the Society from day one. At this year’s 50th celebration at the same venue, the Belmore Hotel, it has mentioned 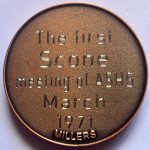 how Jim Haydon got up and said they should just let the market place decide which horses are accepted and go on into the future in the stud book. This has proven to be so true as it is only the better horses whose bloodlines continue on and the inferior fade away.

However, the big task of classifying all the horses was undertaken Australia wide and the contribution of all the people involved was immense, including Peter Haydon who was a local Classifier. He remembers many interesting times, seeing many, many horses and seeing them branded with the Society brand as they did back in those days.

As the Society moves forward and to stay relevant the stud still believes it should be using the best bloodlines, no matter where they come from, embrace them, and make sure they are in future pedigrees.

Breeding from these best horses has greatly improved the calibre of the Australian Stock Horses today. Horses will change in response to what is required of them and the best will always come to the fore. There is no better example of this then in campdrafting, going from mowed, slippery, grass surfaces to sand arenas and the now “Arena Campdrafting”. Similarly, with polo now played on such good smooth, grass surfaces, with fields surrounded by boards, pace with control is just so important.  In polocrosse horses have improved with more specialized breeding as have show horses. The society has come a long way and the the future certainly looks good for our wonderful breed.

The stud’s long term contribution has been recognised with them going from a Gold Member to becoming a Platinum Member. 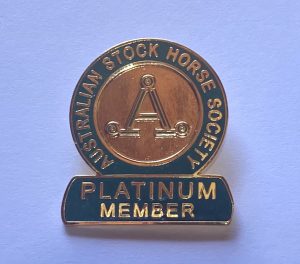