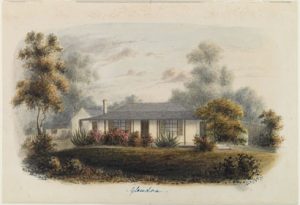 He was by Dover, in the photo above, who was imported by Robert Scott and the details below are taken from the stallion advertisement at the time;

A Bright Bay Horse
Of extraordinary Beauty and Symmetry,
great Bone and Substance,
without White or Blemish,  Sixteen Hands full.

Dover was foaled in 1832, bred by Mr J Edwards, by Patron out of Maid of Kent. Prior to leaving England he founded the renowned Marquis 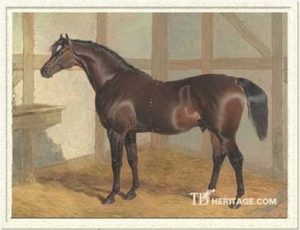 line of thoroughbreds. His sire Patron won the Two Thousand Guineas on 5 May 1829 in what was called a “walk over” and he was by Partisan.

Dover was so popular he had a full book in 1838. His daughter Marchioness won the St Ledger and her brother Marquis was the sire of the famous colonial taproot C1 mare Sappho. He proved a great sire with many of his son’s being successful including Marquis, Young Dover, Pelham, Hector, Prince of Wales, Carrington, Panther, Sinbad, Planet, etc.

Young Dover sired excellent stock at Bloomfield and records show he was repeatedly ridden the 156 km to Maitland where the family banking was undertaken. The family are now the oldest continual client of the ANZ Bank.

To go onto Sydney he would get the steam boat at the bustling Hunter River port of Morpeth where the iconic Arnott’s biscuits originated at that time.

On other occasions he competed successfully at the Maitland Race meetings. This usually involved heats, three races of 3,200 km each on the same day, before being riding home the next day. He had a lot of pace and endurance winning the Maitland Cup in 1843.