TESTER was unbeaten at the quarter-mile at local and district race meetings. He was never actually trained for these events. In these early years the short distance “Bridle Spurts” were the most popular form of racing, with the winner receiving a bridle.

He was a very influential sire and his legacy lives on in most of the Haydon Horse Stud horses today, including Hazelwood Romance and her sire son Hazelwood Conman. 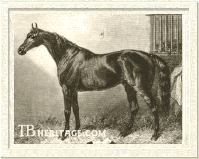 He was foaled in 1885, a black stallion bred by “Brumby” Jack Mullins from Nundle. He was purchased by Bernard Haydon as a three year old. His sire The Tester (1870) was imported by Otto Baldwin to Durham Court, Manilla. His dam Phyllis was by the well known sire Yelverton (1862), also imported by Otto Baldwin. He was by Gemma Di Vergy a son of Sir Hercules. TESTER’S stock were outstanding horses and renowned for their speed in quarter-mile the Bridle Spurts. They were recognized as some of the best horses in the Hunter. Tester’s stock were also exceptionally good riding, working and bush horses, showing a lot of cattle ability.

Most of the mares breeding at Bloomfield today go back in a direct breeding line to TESTER.

Some of his more notable stock include- 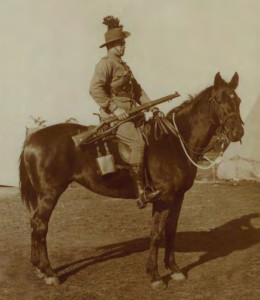 Three horses by Tester took part in the famous Charge of Beersheba. He sired many horses which were sold as remounts for the Indian Cavalry and a number went with the Australian Light Horse to the Middle East in WW1 including;

Midnight- this legendary mare was ridden throughout the war by Lt G B (Guy) Haydon in the 12th Light Horse Regiment. She was selected to represent Australia to compete against the British Cavalier in Cairo. Firstly she won the quarter mile race, which is not surprising given she was by the champion of the event, Tester. Next she won a utility type event and finally winner the equitation test as Guy was an accomplished horseman. They become the heroes of the Light Horse to win all three events at the “Desert Olympics”. In the famous charge of Beersheba as Guy jumped an enemy trench, Midnight was shot from underneath. The bullet passed through her, the saddle and then lodged in Guy’s back just missing his spine by the smallest of margins. He was later taken to Cairo hospital where the bullet was removed which he sent back to Bloomfield as a Christmas present for his mother accompanied by a very moving letter describing the charge. They have had a book written about them  called “Midnight-The Story of a Light Horse” and were included in the 2015 documentary “The Waler”. 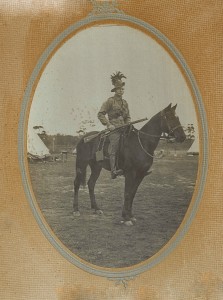 Polo was ridden by Lt B B (Barney) Haydon in the same regiment as his brother Guy. They were the last to be evacuated from Gallipoli and we reunited with their horses back in Cairo. Polo was ridden throughout the entire Light Horse Middle East ridden campaign, a feat achieved by only a few horses.

Hughie was ridden by C L Regg, who was married to Guy and Barney’s sister Madge. He too was ridden throughout the entire campaign. Fred by Tester taken in the Sinai Desert

Fred was given to neighbour Max Wright from Bickham by F B (Fred) Haydon to take to the war. On this return Max gave Fred a piece of his gallant horses’ tail, mounted as a switch, which is still in the Bloomfield Archives today.

His son TESTER BAY was used at Bloomfield as a sire from 1905 to 1910. He was from Actress by Somnus and sired many good horses including Puss the fourth dam of Hazelwood Romance, Bubbles, Cinderella, Lorn Tester and the sire Billycan. He won races and Champion Blood Horse awards. 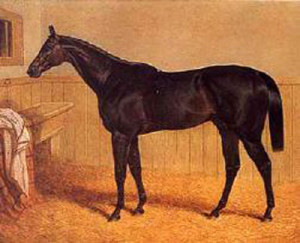 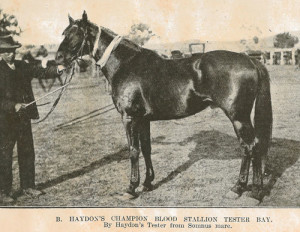 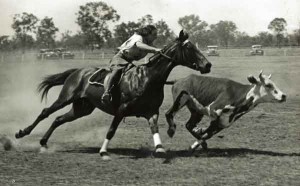