Haydon Starlight, a bay stallion foaled in 1926, was by the outstanding sire Rocket by Rocklight by Glenrock by Eclipse, all prominent sires. Rocklight was also the sire of Mountaineer the sire of Medlow.  Rocket was from the top mare Scotch Lassie by Scotts Grey by the champion Carbine by Musket. Rocket features in the pedigree of Hazelwood Romance being the sire of her fourth dam.

Rocket was bred by the Simpson’s at Glenrock Station, like Cecil, and produced 28 very good foals in the two seasons he was used at Bloomfield, including the highly regarded mares Juliet, Gumnut, Sadie, Wonga, Fidget, Moonlight, Coffee, Berry, Snip, Romeo, Julia and the influential sire Haydon Starlight. 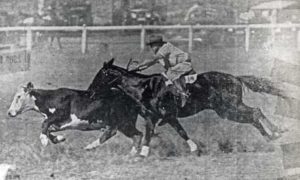 Haydon Starlight’s dam Haydon Trinket was recognised as one of F. B. (Fred) Haydon’s top mares showing exceptional cattle ability. She was from the very good mare Haydon Bangle who was by the renowned early sire, Haydon Tester.

Haydon Starlight was a very good riding horse showing exceptional cattle sense, good temperament, very tractable and trainable. He passed these traits on to his stock, as they were all just so easy to train with incredible cattle sense. Jim Haydon always said you only had to show them and chase cattle a couple of times and they were ready to campdraft, such was their inbuilt cattle sense and trainability.

Haydon Starlight was a notable Bloomfield sire, whose blood has had a very significant influence throughout the breed.

His prominence was displayed through his stock, including:

From Haydon Thora (Thora Family);
–Haydon Twilight, a brilliant mare who broke a bone in her pastern during her first campdraft run on a cement cricket pitch. She was rated by F. B. (Jim) Haydon as one of the best mares he had ever ridden. 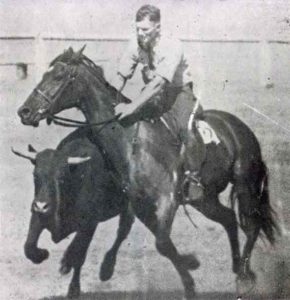 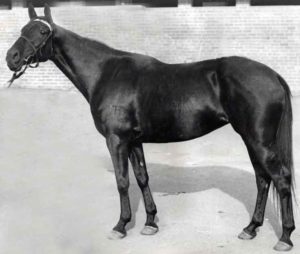 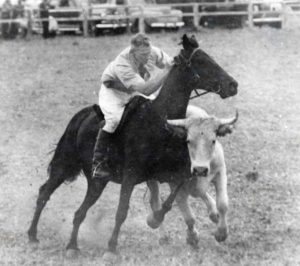 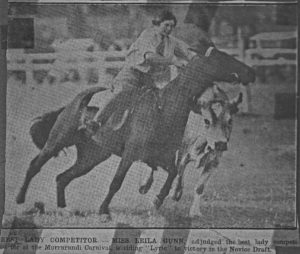 -Haydon Buddy ridden by T Purcell, a winner of flag and bending races.

–Brown Colt from Nancy sold to E. Edmonds who used him as a sire.
–Haydon Gumtip I and Haydon Gumtip II (Kurrajong family) both proved to be very smart mares-especially flag and bending.
–Haydon Freckles from Felix, a useful and handy station mare.

–Haydon Midnight sire of Zella, dam of; Leo Callinan’s Dina by Chan-winner of 34 led stock horse classes, winner of many open campdrafts and competed at Sydney RAS 1974, ridden by Jack Palmer. Her full brothers were the foundation sires Red Ray (1120) and Glen Ray (4244).
–Glengarry Matlock (452) a sire used at Glengarry, dam was by Haydon Starlight. 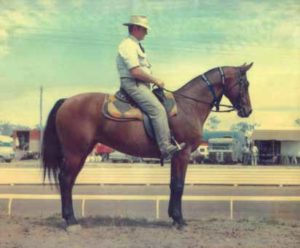 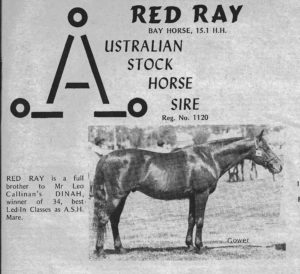 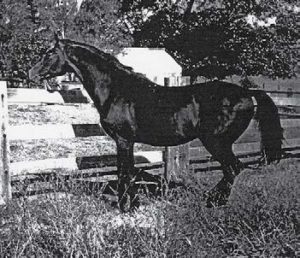 The Haydon’s had country adjoining Glengarry on the Pages River near Wingen and worked closely with them breeding horses. Leo Callinan won a prolific number of ribbons with Dina as they were always the ones to beat. He is quoted in the ASHS Journal talking about Haydon Starlight. “He was a 15 HH bay horse that produced some good sons that took after him. They were good all-round station horses – good in the bush and good with cattle. “I didn’t know Midnight very well,” said Leo, “but I saw him mustering in the bush – he was pretty handy. I have a high opinion of those early Haydon bloodlines – they were very good station horses.”  Midnight sired the dam of the two registered
stallions, LITTLE CHAN sire of BINNIA CHANDELIER, and sire of LEO who sired a number of Terry Blake’s Rosewood Stud horses and the sire WANSEY LEON used by foundation President Bryan Gavin. Another the mare Stella,  produced  COOPLA MING who, amongst others, went on to sire the stallion FINTONA ARTIST, widely used for breeding by the Gower’s Chalani Stud in South Australia. Another of Midnight’s daughter Zella produced RED RAY – FS , GLEN RAY and DINA. Many of the Haydon’s Starlight mares were put to Chan, as the Haydon’s and Glengarry Station used to send mares to each other’s stallions. The bay mare GLENGARRY DINA by Chan Leo Callinan rated as the best horse he had ever ridden.

-Haydon Gleam (Jewel family) a successful campdrafter and sire of many good horses for E. Ireland. His full sister, Haydon Bracelet a good bush and riding mare and through her daughter Haydon Jewel by Bruce Greer has a long list of successful descendants including Hall of Fame mare Haydon Angel Jewel
–Haydon Biddy I (Biddy family) a very active and good mare to ride. Known for her stamina and working ability. Her great granddaughter Haydon Jasmine by Rodeo Rush was played by Kerry Packer at Ellerston and her daughter Elle by Haydon Drawn won many BPP awards.
–Haydon Sunlight (Storm Cloud family) who won the Maiden Campdraft, Murrurundi 1952 and a sire used by B. B. (Barney) Haydon.
–Haydon Wings (Wings family) a mare showing a lot of cattle ability.
–Haydon Lottie II (Lottie family) a good station working mare.
–Haydon Dawn (Winsome family) a top performance mare, won the Championship Draft at Wingen and Willow Tree with other numerous placings. To win the Durham Hotel Trophy at Wingen F B (Jim) Haydon had to beat the renowned mare Norma ridden by Reg Watts in an exciting run off after both being equal in first place. She was selected to represent NSW against Queensland at the Campdrafting at Sydney RAS in 1938 ridden by F B (Jim) Haydon, along with Norma (Reg Watts), Barry (Alex Wiseman) and Radium II (Glen Wisemantle) making up the winning team. 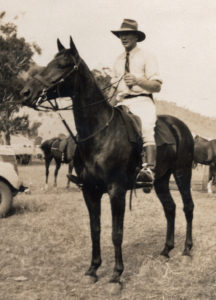 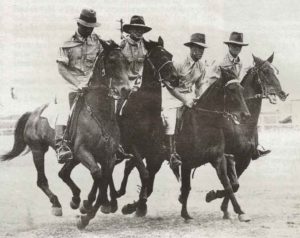 Starlight died at Bloomfield in 1951 at 25 years of age. He sired 118 horses for Bloomfield.