Chan stood at Gengarry at Wingen on the Pages River which was between two Haydon places, Bloomfield where they lived and The Gorge, further down the river. They were continually moving stock between the places and had a lot to do with the Croker’s who owned Glengarry and the Callinan’s. This led to them sharing mares and stallions and this is why so many of the Chan horses were out of Haydon Starlight mares and mares by his son Midnight. The stud retained three Chan mares to breed from Haydon Topaz II, Haydon Wongle and Haydon Winsome. 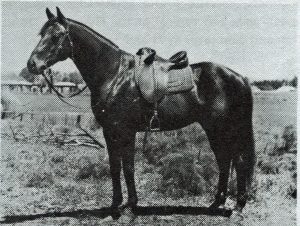 Chan had a wonderful temperament and was an excellent horse to ride, as were most of his stock. Throughout his twenty-six years, Chan produced a number of outstanding progeny with 56 being registered with the Australian Stock Horse Society and had a big influence on the bred.

Frank Scanlon owned Chan’s mother, Witzy, an extremely good mare to work cattle and she was by Medlow. Her mother was a part Arab mare. In 1944, Frank decided to breed the mare to the greatest son of Cecil, Radium. As a result, a brown colt was born in 1945, named Chan, the year WW II ended. Chan developed into an attractive horse, standing just under 15 hands with two white socks almost to the hocks, half moons of white on the outside of both fore coronets and a star on his forehead. 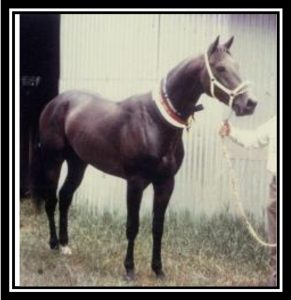 Jim Callinan, a noted horseman, was given Chan, then a youngster, and broke him in when he had reached 18 months of age. After spending a lot of time and patience on the horse, Jim was duly rewarded. Jim said that this was the type of horse that he had spent his whole life trying to breed.

Chan had limited opportunity for competition in the show ring. As a three year old, he drove a piece of rotten wood into the coronet of his near hind leg. This never completely healed, and every now and then, the injury would break out again. Chan started in three campdrafts, winning the Maiden Campdraft and placing second in the Novice Campdraft on the first occasion. Before being barred as a stallion, Chan also competed in three hack classes, winning two classes and placed second in the other class. Leo Callinan, son of Jim Callinan, said that Chan was one of the smartest horses he has seen in a cattle camp.

In the bush, Leo saw Chan jump a wire fence, then turn around and jump back over again. When Jim Callinan led Chan close to a gate or fence, on an extended rein, he had to be careful that Chan did not jump the gate or fence. Chan possessed an exceptional ability to pick up his feet and move backwards, as fast as he could walk forward. One of his regular feats was to quickly back along a straight line of rope laid on the ground, straddling it without stepping on the rope. On occasions, Chan did this whilst ridden bareback with only a stock whip around his neck. 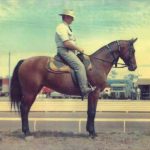 The Chan horses were renowned for their beautiful heads with a lively headset and swan necks. His stock included Glangarry Dina, an outstanding mare winner of campdrafts, working classes many led classes. She was out of the Haydon Starlight mare Zella as were her successful sire full brothers Glen Ray and Red Ray. Haydon Wongle was a quality type winning Led Broodmare at Scone and produced Haydon Beranghi Lass who went on to win Supreme Led at Scone ASH Show. Haydon Topaz II produced Boss Cocky who campdrafted at Sydney RAS and Haydon Chandeleir who played polo overseas. Haydon Winsome produced Champion polo mare Without Doubt. 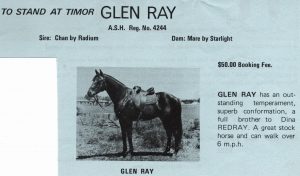 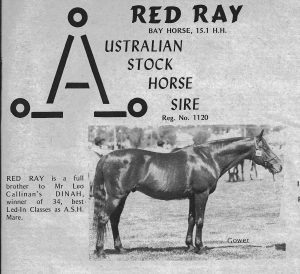