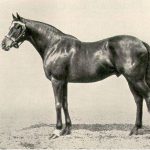 Young Valais was purchased from Lionel Israel, Segenhoe Stud at Scone by F B Haydon. He was a quality bay stallion with a blaze with white hind pasterns. Legend has it he was ridden by Ron McPhee, due to the war transport shortage, from Sydney to Brisbane in 1946 when they were faced with all the northern rivers in full flood. Apparently he swam them all with ease! This trip proved what a great riding horse he was. He showed exceptional stamina and ability in the bush. He past onto his stock all these traits as well as distinctive quality they were renowned for. Young Valais progeny made a big impact where ever they went and have flourished into future pedigrees. Some of his notable progeny include: 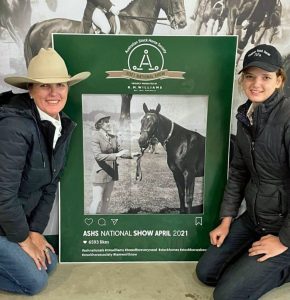 Wansey Style by Young Valais led by Jean Gavin in the ASHS Nationals Poster 2021 with Jill and Florence Macintyre. Buttons, Jim Gilmore’s Champion mare was out of a Young Valais mare HRH The Prince of Wales on Haydon Bambi in 1966, Just Fred’s full sister and a brilliant all round performance mare