Haydon Dancer was top priced lot at the stud’s 1991 on property sale. A well bred stallion being by Breezette’s full brother Musket by The Gun and from the Thora Family broodmare Haydon Ballerina who combines Sundown, Young Valais, Bobbed Steel, Starlight and Tester blood.

His dam Haydon Ballerina is out of Haydon Pirouette now an ASH Foundation Status Mare. This is such a strong family having so many good horses over the years. His full sister Haydon Ballerette produced Haydon Night Diva also a Nat Buchanan Trophy winner, which is presented to the Best ASH in Australia each year in a selected discipline. It has now been won by two members of this Thora Family, Dancer and his niece Night Diva. Ballerette also produced Haydon Flashlight who won Best Polocrosse Horse in Victoria, top horses Haydon Night Song, Haydon Lisette, Haydon Moon Shadow, polo and broodmare Haydon Evette. 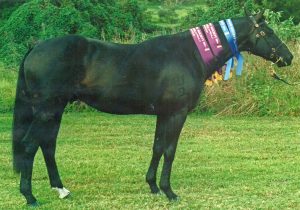 Haydon Dancer winner of many ribbons

Dancer started his performance career winning the three old Wigdee Futurity. He went on to win many led, working classes, campdrafts and high point awards. At the feature Dalby Show in 1995 he won Champion Working Horse.

He was acquired by Judy Rankin in 1997 and in a short time had won 8 Supremes, 24 Champions and 38 firsts in ridden, led and hacking classes. In his first dressage competition he received the highest score of the day and he had been serving mares during the week. He was then purchased by Mark Ruff and further used as a sire. 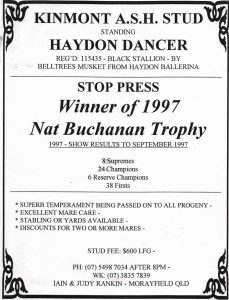 In 1997 he was awarded the prestigious Nat Buchanan Trophy.

lightest horse they had ever ridden. Haydon Dancing Lass (Pavlova) won in the showring six months after being started and has amassed a large collection of ribbons. Haydon Legacy was shown successfully and was a successful sire, Haydon Tahini played good polocrosse as did Haydon Pashmina.

His semen was used in the UK resulting in notable performers Alfie and Risebridge Spring. 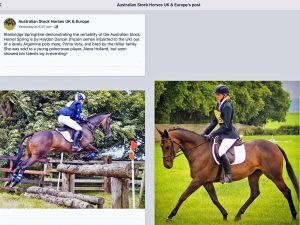 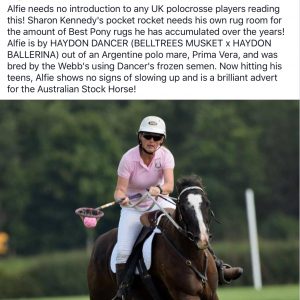 Haydon Dancer has 65 registered progeny in Australia and his semen was used overseas. Many others have been successful including Midland Pedro who won at Sydney RAS, Dainty Dancer ribbon winner, Prima Donna 1st Melbourne Led Futurity and Kinmont Tuscany 1st Led Gelding at Victorian Championships and was Champion Two Year Old Brisbane EKKA. 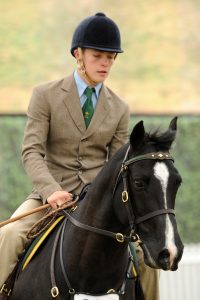 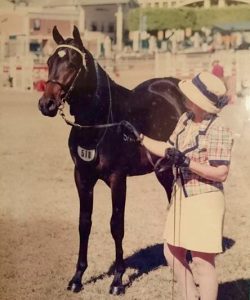 Haydon Pavlova prolific winner of ribbons for the Lavender Family 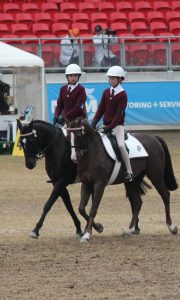 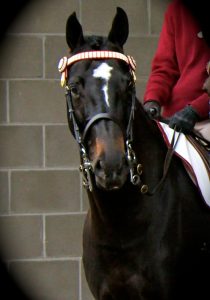 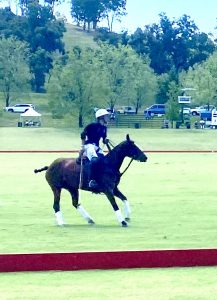 Haydon Illusion Ellerston 2020 out of Haydon Mirage by Haydon Haydon

Haydon Ballerina at 24 years of age

Haydon Vision out of Haydon Mirage by Haydon Dancer

Haydon Mirage as a foal

By Haydon Legacy by Haydon Dancer 2016